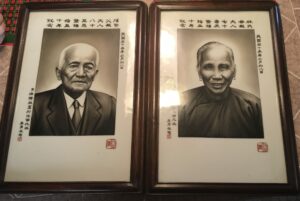 I’m sitting in DIA waiting for my plane to DC. Along with me are the ceramic tablets that my cousin Margo gave me a couple of weeks ago in Lodi – they were commissioned by Uncle Harry (in Hong Kong? China?) and are 30 pound large photos inscribed on white ceramic of my two grandparents on my mother’s side, who died in China and whom I never knew.

Perhaps there are the familial dralas coming along with them – my heritage from China – ones that I never knew but Chinese dralas that seem to be coming at me full-force ever since I went to Japan – 2 years ago – and Hong Kong – last year – and India Thailand and Taiwan – earlier this year.

In California there’s a palpable feeling of the Asian identity that I didn’t have so much growing up – more was a token or smaller community in DC – and certainly don’t have in Colorado. Along with the recognition of Asian faces and gestures is the felt somatic sense of being with what is familiar – not worrying about “do I fit in?” Or can I pass as a white person? (Since I’m not black and so much of the narrative in Colorado is black/Latina vs white).

Emanating from this felt sense are the patterns of thinking, ways of gesturing, and slightly “irrelevant” stance that Asians often take in the US – as if saying “I’m good, serious, and competitive – but also funny – so don’t take me TOO seriously and I’m certainly not a threat to you”. Ha ha

Returning to the tablets – they are heavy and large (30 pounds and 10×15” or so) – intended for my mother – who is the elder in the family now. They have a weighty quality – not just in size and heaviness, but also in family and lineage of Chine-ness. 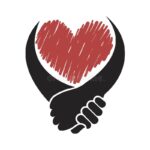 It's been a long month, and I've been thinking a lot about diversity, inclusion, social injustice, and simply how we treat each other - people we are familiar with, and more importantly, people we don't know, but have embedded opinions about.  It's ...

END_OF_DOCUMENT_TOKEN_TO_BE_REPLACED

I’m on a panel with my colleagues in India and Thailand – check it out at  https://www.buddhistdoor.net/news/deer-park-institute-announces-webinar-finding-balance-in-challenging-times

The event is open to everyone and is free of charge. To register, email: info@nulldeerpark.in

Especially these days, genuine communication and connection with all people and their manifestation of basic goodness is key.  Cultural humility is a practice that encourages respectful partnerships through the exploration of similarities and differences between the histories, priorities, goals, and capacities of these groups, and is a lifelong process of self-reflection and self-critique that supports cultural difference. This presentation will explore how we might open our hearts to others, as well as listen and allow for conversation, longings and desires.

In October, I’m zooming in with young folks at Dharma Drum Mountain in Los Angeles.  Contact me if you’re inte

In this program, we will discuss specific ways that our Buddhist understandings of suffering and basic goodness directly inform caring for self and others in contemporary times.
For more details and to register: https://philadelphia.shambhala.org/program-details/?id=463743

Join me on social media